In part 1 and part 2 we have explored some techniques that allow us to build simple future-like computation chains without type-erasure or allocations. While our examples demonstrated the idea of nesting computations by moving *this into a parent node (resulting in “huge types”), they did not implement any operation that could be executed in parallel.

Our goal is to have a new when_all node type at the end of this article, which takes an arbitrary amount of Callable objects, invokes them in parallel, aggregates the results, and invokes an eventual continuation afterwards. We’ll do this in a non-blocking manner: the thread that completes the last Callable will continue executing the rest of the computation chain without blocking or context-switching.

How can we achieve this? Is our existing design good enough?

Unfortunately, the answer is no.

flaws with the current design

In our current design, the computation chain is executed bottom-to-top:

Here’s a diagram of the current design: 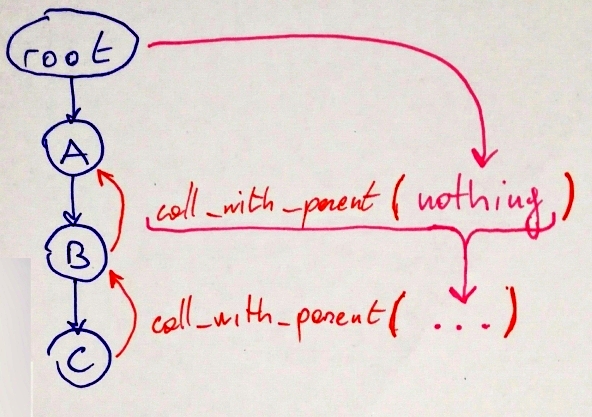 Note that we could make when_all fit in our current design, but it would need to block until all its computations are completed (e.g. using a latch). Here’s an example of how it would look: 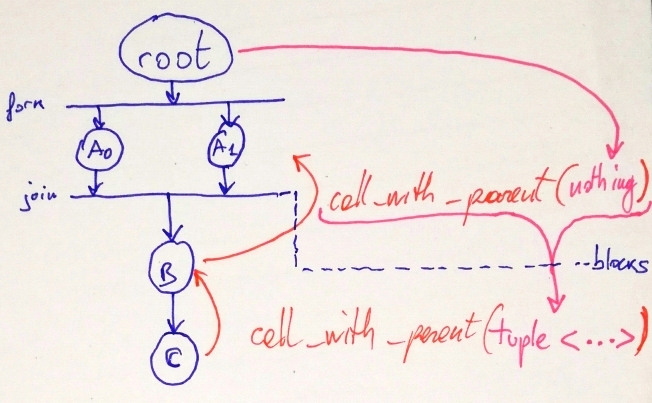 In order to allow when_all to have non-blocking behavior, we have to almost literally turn our design upside-down: we’ll begin at the root, recursively executing the children of the current node.

We’ll have to solve two problems:

How can we possibly find the root node while still keeping track of all the children found along the way?

The answer is, of course, recursion. We’ll define a walk_up member function that, when invoked, will invoke itself recursively on the parent, passing the current node as an argument. This will build a linear chain of nodes as a variadic set of function arguments.

The first node on which walk_up will be invoked is the final leaf. It will pass the scheduler and itself to its parent, which will do the same recursively until the root is found. Upon reaching the root, we’ll stop going up and begin going down, having every node execute itself and its child. 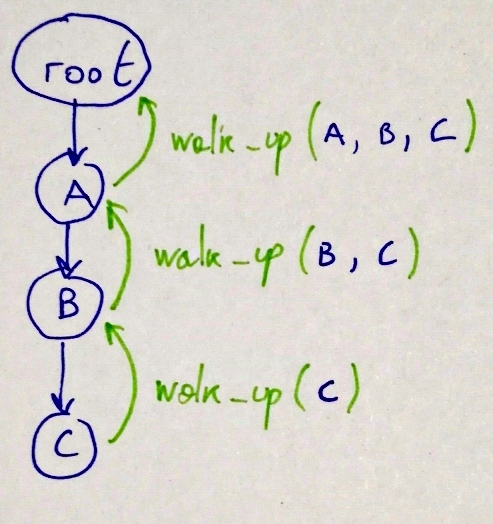 The walk_up implementation for root will start “going down”, by calling .execute on its child:

The semantics of .execute are as follows:

This is the signature of .execute:

As you can see, we always expect to get a scheduler and a result (which could be nothing) from our parent. If the current node is not a leaf, one or more children will be passed to .execute from its parent.

Here’s a diagram showing a simplified example of going down a linear chain: 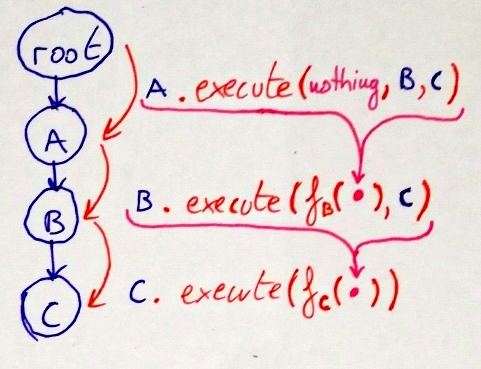 You can see the benefit of this approach in the following diagram. The scenario is as follows: after the root, there is a when_all node with three computations (\(A_0\), \(A_1\), \(A_2\)). In the particular hypothetical example run shown in the diagram, \(A_2\) is the last node to complete execution. Since \(A_2\) knows that its children are \(B\) and \(C\), it can invoke .execute on \(B\) on the same thread, without requiring blocking/synchronization. 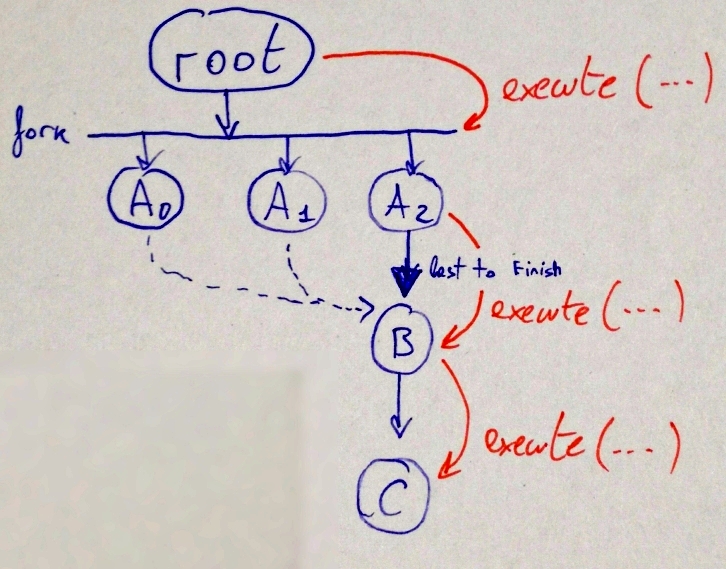 Let’s now take a look at how this new design is implemented in a linear chain. Do not worry - I promise that I’ll show the implementation for when_all in this article. We’ll begin with boilerplate:

It’s very similar to the implementation we had in the previous article, but there are a few things to note:

With our new design, wait_and_get remains unchanged. The definition of node</* ... */>::then is however greatly simplified, because we don’t need to propagate parents anymore:

Firstly, it executes the stored computation with the value received from the parent node: as_f()(FWD(r)). It then invokes .execute on the next child, propagating the scheduler, the result of the computation, and the eventual rest of the children.

That’s basically it for linear nodes - you can find a complete example on wandbox.org or here on GitHub.

Finally, we’re going to see some parallelism in action. The plan is as follows: we’ll create a new type of node called when_all that:

It is almost identical to a linear node, but has a few important differences:

You might also have noticed that .then is now a variadic function template. It will now either produce a node or a when_all depending on the amount of passed functions:

The initiate function has also become more interesting: it will instantiate a schedule, which is a new auxiliary node type which simply schedules the next child (instead of running it on the main thread). This allows more fine-grained control in the future, as the user might or might not want to schedule a computation chain depending on the context. Every invocation of initiate will either return a node or a when_all:

Before diving into when_all::execute, let’s take a look at a usage example:

In the above code snippet, initiate will produce a when_all node with two computations. In practice, you will see "A0" and "A1" being printed in an arbitrary order. When the last of the two computations is completed, the .then continuation will be invoked with a tuple containing \((1, 2)\). We then use structured bindings to unpack the tuple and return the final result, which should always be \(3\). As always, wait_and_get guarantees to block until the whole chain is completed thanks to a latch.

Let’s now look at the most interesting part: when_all::execute. We’ll only analyze the general case, as the leaf case is pretty much the same.

This is a simple metaprogramming utility that, given an arbitrary amount of compile-time values, executes an user-defined action passing the index as the first argument and the value as the second argument. You can think about it as a compile-time version of Python’s enumerate(...) function. Its implementation is explained in the appendix.

We’re passing type_wrapper_v<Fs>... to enumerate_args. As the name suggests, type_wrapper is a simple compile-time value-like wrapper over a type - if you’re familiar with Boost.Hana this should seem natural to you. Here’s its implementation:

Our lambda will be invoked multiple times, like this:

Inside the lambda passed to enumerate_args we define another lambda: do_computation. It contains the instructions to execute for the current computation and will be invoked either with or without the scheduler:

The _left.fetch_sub(1) == 1 makes sure that the decrement and check is performed atomically. We’re checking equality against 1 and not 0 as std::atomic<T>::fetch_sub returns the value of the atomic prior to the decrement.

Finally, we branch at compile-time to check whether or not we should schedule the current computation:

That’s it! You can find a complete example on wandbox.org or here on GitHub.

Note that the current implementation produces invalid assembly with g++ due to a compiler bug. You can find more information here and it is trivial to work around the issue. Also, clang++ produces some nonsensical warnings related to deduction guides that I suppressed using -Wno-undefined-internal.

Given a FunctionObject f and a set of arguments xs..., this utility invokes f with all xs... that are not nothing. Here are some examples of what call_ignoring_nothing does:

Its implementation is recursive. The base case is when there are no arguments: f is invoked immediately.

Basically, it matches the first argument x and a possibly empty set of remaining arguments xs.... It recurses over call_ignoring_nothing, binding x to f if it’s not nothing, otherwise completely ignoring it.

This one is quite simple, but useful. The interface enumerate_args function invokes enumerate_args_impl, passing an std::index_sequence<0, 1, ..., N>, where N is the number of arguments:

Inside enumerate_args_impl I use a fold expression that expands both Is... and xs... in lockstep to produce “pairs” of “index + argument”: